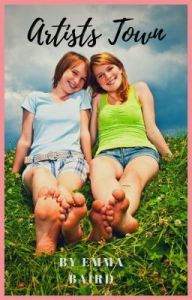 Drum roll – I finished rewriting something this week. Big deal, Ms B, you say, and I don’t blame you.

But regular readers and friends might know I LOATH rewriting. When I finish a book, I go off it very quickly. In the perfect world, it would rewrite itself, magically upload itself on Amazon, Kobo et al., and then, oh I dunno, sell? And sell in enough quantities to make money.

I gave myself a ticking off. Emma, I said, the magic fairies do not come along and do this for you. In came the carrot and stick. Restructure the novel – BOOM; you get a glass of wine. Fail to rewrite for an hour or so. WHACK – you’re not allowed to write anything new. (Writing new stuff is what I love doing.)

The carrot thing, unfortunately, ran out on 1st January as I signed up for one of those Dry January thingies, so that motivated me to rewrite faster.

Rewriting Artists Town kept presenting different issues. I changed my mind numerous times about the order of some chapters. A weird and wonderful crime that took place in the 1990s was my inspiration. When I did more research, I had to change quite a few things.

And then there were the bloody comma splices. My factual writing differs a lot from my creative writing style. It turns out I am forever putting independent clauses in one sentence. I’m not keen on semi-colons, and they shouldn’t be used too frequently anyway. I rewrote a lot of sentences as a result.

I end a lot of sentences with prepositions too*. I took them out where this would improve the prose, but left in a lot of them as otherwise the sentence didn’t sound natural.

But hey, at least I know what comma splices are now!

One rewrite does not a finished novel make. Improvements are still needed. And I have some factual stuff I need to check – police procedures relating to crimes committed in different jurisdictions. But the project is a lot further on that it was two months ago.

Here’s the blurb for the book, which I hope to publish later this year:

Fifteen-year-old Daisy has been dragged along on a family holiday in a small Scottish town against her will. But then, that’s what happens when you suddenly develop a chronic health condition. Your mum and dad take away all your freedom.

Still, the holiday has its compensations. There’s Katrina, resident ‘cool’ girl who decides to take Daisy under her wing. Katrina happens to have a gorgeous, older cousin who looks at Daisy in a certain way. Is this holiday about to change Daisy’s life for the better?

Escaping from London seems to have affected Daisy’s dad. He’s got some madcap schemes in mind, but just where is all the money for this coming from?

Set in 1990, Artists Town is a coming of age tale that explores friendship, first love, learning to be cool and navigating life’s challenges.

*See the wonderful Grammar Girl’s article on ending sentences with prepositions. She also does a weekly podcast which manages to make grammar easy to understand AND interesting.