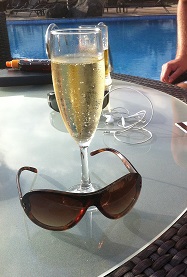 A writer friend and I signed up for the One Year No Beer challenge in January. Before you think us super-saintly, I’m duty-bound to point out that One Year No Beer offers different alcohol-free options – and most of them don’t last twelve months.

Its main one is the three months no alcohol (which doesn’t scan half as well as one year no beer) as well as a yearly version and the more achievable 28 days programme. My brave friend opted for three months; I picked the one-month version.

Writing is notorious for attracting its share of hard drinkers. Most people can name a bloke, but female imbibers include Patricia Highsmith, Jean Rhys, Dorothy Parker and Elizabeth Bishop. French novelist and filmmaker Marguerite Duras wrote about being a real writer and a real alcoholic. She’d drink Cognac in the morning and then a glass of wine every hour, and she wrote afterwards, astonishing herself by how much she managed to write.

Would going teetotal for a while help with our productivity, my friend and I wondered? If you spend your evenings binge-watching Netflix (as we’ve been doing) and steering clear of Prosecco’s siren call, will that make us more creative, fingers moving over keyboards in double quick time? And concentration is supposed to get better too when you aren’t fighting the after-effects of toxins.

I’ve done the odd bit of writing accompanied by a glass of wine. It often helps with blocks. I’ve reached this bit of a book, and I’m stuck. The wine seems to fire off creative sparks. Writing without it has shown that I imagine things. The process isn’t just thanks to alcohol. As the marvellous Lee Childs once put it, truckers don’t get trucker block, do they? Stick yourself in front of a blank page and just BLEEDIN’ write.

Anyway, to keep my friend company I’ve extended my challenge to six weeks. I’ll tot up my word count then and let you know.

PS – I sincerely promise not to be evangelical and annoying about this. No prude like the reformed rake, as the saying goes. The same often applies to folks who give up smoking and/or drinking. I love wine. Just sayin’.