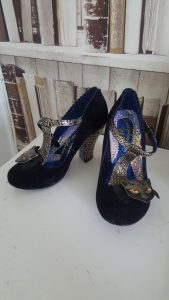 My lucky shoes – sort of

Ever noticed how often shoes turn up in women’s fiction—and specifically on the front cover? I’ve treated you to a picture of my favourite pair of shoes (to look at, not to wear as they are murderously uncomfortable) that incorporate one of my other great loves.

So what is it with shoes and women’s fiction? Let’s start by blaming Cinderella, the only woman in the kingdom whose feet fit the delicate glass slipper and endear her to the prince. (And thus cementing femininity to the owners of small, slender feet.)

It isn’t women’s fiction, but the Wizard of Oz’s Dorothy clicking together the heels of her shiny red shoes is another enduring image. Did you ever covet those red shoes if only for the promise they might magically transport you from one place to another. And that must be a metaphor shoe manufacturers all over the world seek to exploit. Wear our shoes and you too will be lifted instantly from your dull world and your mundane existence.

Carrie Bradshaw must take a bit of the blame too. Sex and the City famously featured an episode where the fictional heroine was robbed of her Manolo Blahniks* at gun point. And it is that theft, rather than the bag or the money that bothers her the most.

Chick lit tends to run with the assumption we are all shoe mad. It’s not a huge leap. I called this blog High Heels and Pink Glitter when I started it and I even mocked up a chick lit book cover using that too-common image of bare legs and sandals. I have plenty of acquaintances who love shoes, even just to look at if not to wear. In my many years of wearing high heels, the decorative value is hugely disproportionate to any wearability. The only heels you can walk in are block ones of not more than three inches and wedges. Even then, I don’t advise you to travel far by foot.

But yes, the assumption is often there that a heroine’s adoration of pretty, delicate, impractical foot wear is shared by us all. Here are two:

“Paris is a heaven for all woman’s obsessions: hot men, great chocolates, scrumptious pastries, sexy lingerie, cool clothes but, as any shoe-o-phile knows, this city is a hotbed of fabulous shoes.”

“Besides, I’d seen a really nice pair of shoes yesterday in the mall and I wanted them for my own. I can’t describe the feeling of immediate familiarity that rushed between us. The moment I clapped eyes on them I felt like I already owned them. I could only suppose that we were together in a former life. That they were my shoes when I was a serving maid in medieval Britain or when I was a princess in ancient Egypt. Or perhaps they were the princess and I was the shoes. Who’s to know? Either way I knew that we were meant to be together.”

It isn’t a trope that is going to vanish soon, but women’s fiction that veers toward the comedic or romcom often turns it on its head by featuring heroines who prefer sneakers, Birkenstocks or trainers—the comfy stuff most of us wear 99 percent of the time.

Here’s my own take on it from Highland Fling:

“I made a token protest and gave in. It was always better not to argue with my friend, who is the oldest of four sisters and well-versed in giving orders. Besides, the dress was fabulous—a mustard floral frill skater dress she’d matched with a deep purple and silver crochet cardigan. The belt was silver too, so as predicted it matched perfectly. I argued in favour of my Converse trainers to give my outfit a fierce edge and lost. No, she said. For such an occasion, high-heeled cork wedges were the only options.”

*By the way, two years ago Marks and Spencer’s created a lookie-likey version for a mere £35… You’re welcome.