Visited Harrogate! As any hardy British holiday-maker knows, sunny weather is never guaranteed but the gods of fortune smiled on us. The sun shone brightly. No jackets required. We did our fair bit of sitting out in beer gardens to support the local economy. I know. Aren’t we good ‘uns?!

Harry’s Free Walking Tours offers you a guided walk around the main attractions and explains the town’s history from Roman times to its best-known period, the late Georgian and Victorian era when it was THE choice for the hoi-polloi wanting to take the waters.

The Royal Pump museum details what a typical spa day might involve. No surprise to see that drinking lots of water and taking gentle strolls is the main point. For some patients, the advice stresses, massage might be better than exercise… Heavens, wouldn’t want the rich and far too privileged to over-exert themselves, would we?! 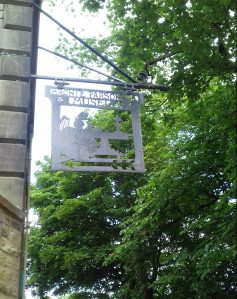 Yorkshire has plenty of literary connections; the best known being the Brontë sisters. The museum in Haworth feels perfectly preserved in its 19th Century past. This year is the bicentennial of Emily Brontë’s birth, and the original of Branwell’s famous painting (below) is on display.

Various theories abound about why Branwell painted himself out. The first is that he didn’t—his oldest sister ordered it years later because of his subsequent alcoholism and drug abuse, and the effect it had on the family. Experts at the National Gallery, however, have studied the painting and their view is that he painted himself out at the time.

So, perhaps he was too critical of his self-portrait. Or the composition didn’t work. If you step back from the painting, it’s easy to see that four people would make it crowded. 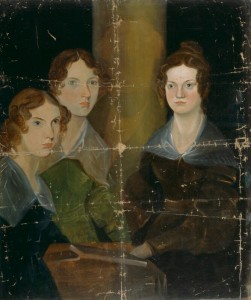 My husband’s theory is that having three teenage sisters pissed seventeen-year-old Branwell off sometimes. He painted himself with them, took a hissy fit one day and thought, “Sod it, I’m not immortalising myself with those b****es.”

Harrogate’s literary connections involve Agatha Christie, who turned up there in 1926 at the Old Swan Hotel following a brief disappearance and country-wide manhunt. She claimed amnesia. Most theories for the disappearance relate to her husband, whom she divorced two years later.

In 2006, biographer Andrew Norman said he thought her disappearance related to ‘fugue state’, a rare, deluded condition brought on by stress or depression. 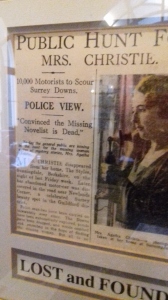 The Old Swan Hotel is still there, and in July writers will gather there for the annual Theakston’s Old Peculier Crime Writing Festival. I’m willing to bet the room Agatha spent her week there in 1926 is booked months in advance, if progress didn’t demolish it.

In another (sort of) literary connection to my holiday, I met up with an online chum. Caron Allan edited my book, The Girl Who Swapped, last year, and we struck up an online friendship. As a writer you spend a lot of time in your own head, battling voices that tell you, why oh why oh why do you think you can do this? Fool! Email exchanges with someone who shares your plight are invaluable.

Caron has also been very successful this year, and her story is hugely inspirational. She’s done all the right things—she has a website, she’s writing a popular genre (crime) and a series, and she’s figured out what works on Amazon advertising. We met at the National Rail Museum café and the three hours flew past in no time.

Finally, Sandy and I are greedy guts one and two. And by ‘eck (to use a local expression) did Yorkshire serve our unregulated appetites well. Thanks to its spa past, beautiful location and many conferences and festivals, the town’s well-served for restaurants, cafes and pubs. If there was a doozy, we never saw it.

The most famous of Harrogate’s five-star places is Betty’s Tea Rooms, a fairy-tale looking place from the outside, its windows displaying rainbow-coloured piles of macaroons. We, er, didn’t go. However, my standout meal was from the Blues Bar on Montpelier Parade. Yorkshire tapas are new on me, but blimey it makes sense to offer folks a small sample of imaginative interpretations of local dishes, doesn’t it? If they over-order as a consequence, on their heads be it. 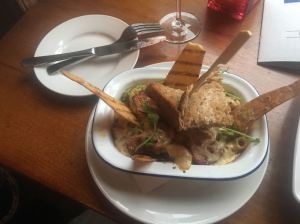 My favourite was their Yorkshire rarebit mac and cheese, carb heaven for someone who avoids them in daily life. The resultant high blood sugars were well worth it.