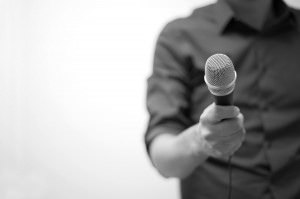 Greetings faithful readers and thanks to you for dropping by. Here’s another excerpt from my book, Katie and the Deelans…

Adam Hartley, Central TV’s youngest broadcaster, had visited Ballingham High School many times in the two years he had worked for Central TV to report stories. Most of them had been bad news.

There had been the arson attack. Then there had been gang warfare, when rival school gangs battled it out for control of the school’s drug supplies. The worst incident, however, had been when one pupil murdered another in a fit of jealous rage.

Central TV’s newsroom boss – Sharon Watson – had stopped by Adam’s desk that morning. He had been doing his best to look busy, as Sharon was a very scary boss and liked to catch her staff out when she thought they weren’t doing enough work.

“Adam, I find this hard to believe but I’ve just had a phone call from the education boss at the council – you know, Donald Chips – and he tells me there has been a remarkable improvement at Ballingham High School. They’ve had a 50% improvement in their exam results. What are you working on at the moment?”

Adam, who had been doing nothing – there never seemed to be any new news on a Tuesday afternoon – quickly thought up something that he thought might impress Scary Sharon.

“I was looking back at some of the stories I worked on last week seeing if there were ways that I could have done them better Sharon.”

Sharon shook her head. “Really? Useful as that sounds, I need you to go out to Ballingham High straight away and do a piece about the exam results. Talk to the head teacher and see if you can find a couple of pupils to interview – ones who passed and hadn’t expected to pass, that sort of thing.

“Oh, and make sure they are good-looking pupils. Our viewers don’t want to see any fat, spotty teenagers on the six o’clock news. It’ll put them off their dinner.”  END_OF_DOCUMENT_TOKEN_TO_BE_REPLACED